Last summer, the American Association for Justice issued a report that asserted there are unsound practices in the trucking industry that are making trucking accidents more likely. It states that “Truck drivers – compensated by miles driven, not hours worked – are pushed to ignore safety measures, delay repairs and drive in a fatigued state.”

On a related note, The National Highway Traffic Safety Administration (NHTSA) issued a report that revealed the top 10 states for fatal large truck accidents. In some states, truck accidents made up a significantly higher proportion of fatal vehicle collisions than the national average. In 2012, there were 45,637 vehicles involved in fatal crashes, 3,802 (8.3 percent) were large trucks.

Here’s how the states ranked in total number of trucks involved in fatal accidents:

The NHTSA report also came up with the states where large trucks made up the highest percentage of vehicles in fatal accidents:

Commercial trucking accidents can pose more complexities in an injury case, in part because there’s generally going to be at least three parties involved: the two drivers in a collision, and the truck driver’s company. This may mean a more complicated road towards a justified level of compensation, which highlights the importance of having the best legal representation possible if you are involved in such a case. 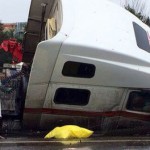 Roadside Inmate Crew Hit By Commercial Truck
What Is Covered by My Car Insurance?