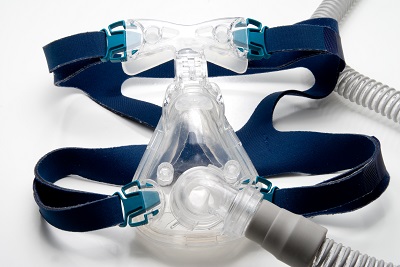 According to the Centers for Disease Control and Prevention, as many as 70 million Americans suffer from a sleep disorder. There are a number of potential negative health consequences, one of them being a significant reduction in driving safety, due to the lack of quality sleep related to disorders like obstructive sleep apnea.

In some cases, people who suffer from sleep apnea will use a mask that supplies continuous positive air pressure (CPAP) to combat the problem. Makers of these devices have good reason to promote themselves to the trucking industry, where drivers can legally spend as many as 70 hours in a week on duty.

Three device makers are doing just that, with the help of a major truckload fleet. They have put together a field test of battery-powered CPAP masks used among truck drivers. The battery is mounted in a sealed box under the bunk.

Beginning last May, four tractor trailers have been equipped with a dedicated battery to power a mask that runs on 12 volts DC. The goal is to include a fifth sleeper-cab tractor trailer.

One battery can supply enough power to run a mask without an idling engine or running down the main chassis batteries.

The report was presented at a task force meeting of the Technology & Maintenance Council of the American Trucking Associations.

In 2007, the Federal Motor Carrier Safety Administration (FMCSA) released The Large Truck Causation Study. Driver fatigue was an associated factor in 13 percent of the estimated 141,000 large trucks involved in crashes during the study period.

One can only guess how many other crashes happened due to other associated factors that are really about fatigue. For instance, over-the-counter drug use (17 percent) and illegal drugs (2 percent) may have been in use to fight fatigue. Also, drivers may have been more susceptible to internal and external distractions (cumulatively 10 percent) due to lack of sleep.