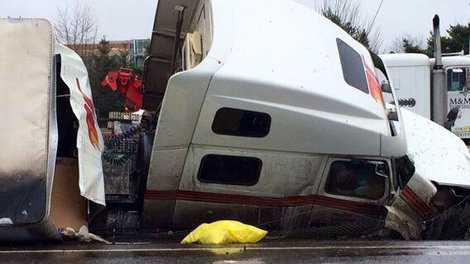 There are plenty of ways an inmate can get their sentence shortened, getting hit by a semi truck is not one of the more favorable ones. On February 11, three female inmates working on the side of Interstate 5 in Wilsonville, Oregon were struck and injured when a commercial truck crashed into a ditch, according to state police.

Maybe the strangest part of an already fairly strange story, is the reason reported for the truck driver’s mishap. According to a report at KGW.com, 44-year-old Edwin Gagarin choked on coffee and passed out while driving. His truck then sideswiped the inmates and then crashed into a cable barrier and landed in a ditch.

Otherwise, Gagarin was driving his truck southbound in the right lane at a normal speed of about 55 mph before he said he passed out.

Angela Baca, 40, was rushed to the hospital to treat her injuries. While serious, her injuries were reported as not life threatening. At the request of the Multnomah County Sheriff’s Office, a judge released Baca from prison early so family members could be with her during recovery. The accident only shaved off nine days from her sentence, as she was set to be released on February 21.

One of the other inmates was treated at the scene of the accident and the truck driver, from Sunnyvale, California, was taken to the hospital, treated and released.

Two lanes were blocked while a hazardous materials crew attended to a 25-50 gallon diesel fuel leak. The truck was hauling paper products.